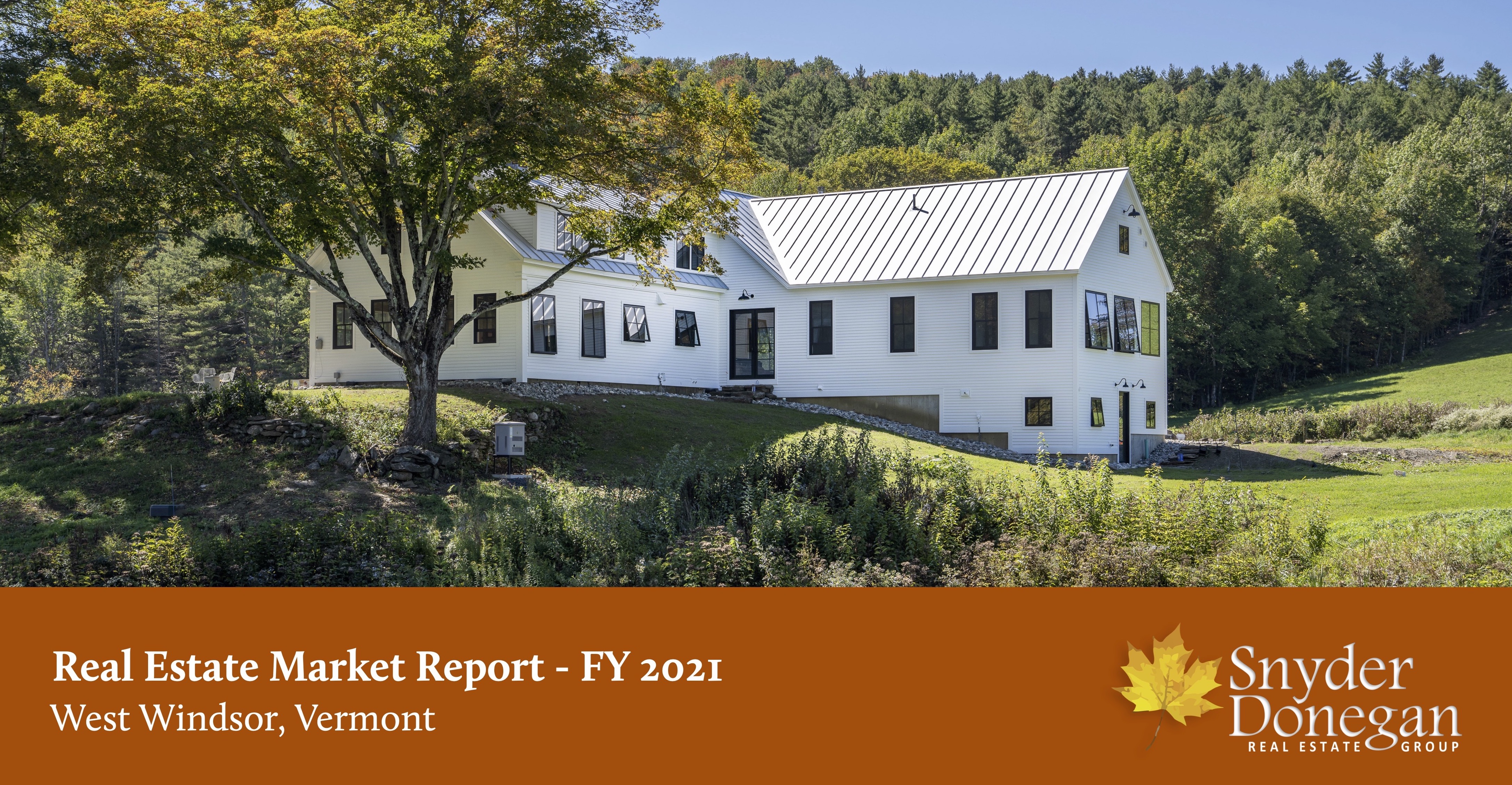 The West Windsor, Vermont real estate market saw twenty-four (24) sales of single-family homes in 2021, down from a record-breaking thirty-three (33) homes sold in 2020. As of December 31, there were an additional three (3) homes active under contract or pending and likely to close in the coming months.

The average price of homes sold in West Windsor rose to its highest mark since 2008, up over 18% percent from 2020 to $584,017. Additionally, the average negotiating discount– percent difference between a home’s list price and sale price– dropped to just 0.40%, while the average days homes spent on the market prior to sale fell significantly to 68 from 210 in 2020, both of which point to the extraordinary motivation level of buyers in the market. In fact, buyers paid at or above a seller’s asking price in thirteen (13) of the 24 transactions on the year.

After several years of breakneck buying activity, however, there is now an historically low level of available inventory in the market, as there was just one (1) home actively listed in West Windsor as of December 31. Though we remain optimistic about the 2021 market, West Windsor will need a considerable infusion of new listings to keep up with what we expect to be continued strong buyer demand.

The Greater Woodstock Vermont market area (Barnard, Bridgewater, Hartland, Plymouth, Pomfret, Quechee, Reading, West Windsor, Woodstock) had another banner year in 2021 with 345 sales of single-family homes. Because of declining inventory, this was down 12% from 2021 but still at its second-highest mark of all time. Individually, the towns of Barnard and Woodstock matched their all-time sales records of thirty-four (34) and eighty-five (85), respectively, while Bridgewater and Reading broke their previous sales records with twenty-five (25) and twenty-two (22). Of the 345 homes sold in the GWA, buyers paid at or above a seller’s asking price in 186 of the transactions, with the average price hitting a record-high $569,659.

After two years of unprecedented market action, it stands to reason that the market is now significantly lacking in available inventory. As of December 31, 2021, there were just twenty-two (22) actively listed single-family homes on the MLS in the Greater Woodstock area, down 68% from the same time in 2021 and a down a staggering 85% from pre-pandemic 2019. Of the 22 active listings, thirteen (13) were priced over $1 million, making the average price of available homes $1,815,295.

As with the rest of the market, buying activity in the luxury market in the Greater Woodstock market area was very strong in 2021, with thirty-five (35) sales of homes over $1 million, a total second only to 2020’s thirty-eight (38) luxury sales. Snyder Donegan was pleased to represent fifteen (15) of the buyers and/or sellers of those luxury properties– including the highest priced sales in Barnard (182 North Road –$1.3 million), Hartland (32 Horton Hill Road –$1.8 million), and Woodstock (2574 Garvin Hill Road –$2.5125 million) – underscoring our company’s success with transactions in the luxury market.

WEST WINDSOR FY 2021 BY THE NUMBERS

Charts illustrating portions of the above information can be found below, followed by a complete list of all 24 single-family properties that closed in West Windsor in FY 2021. 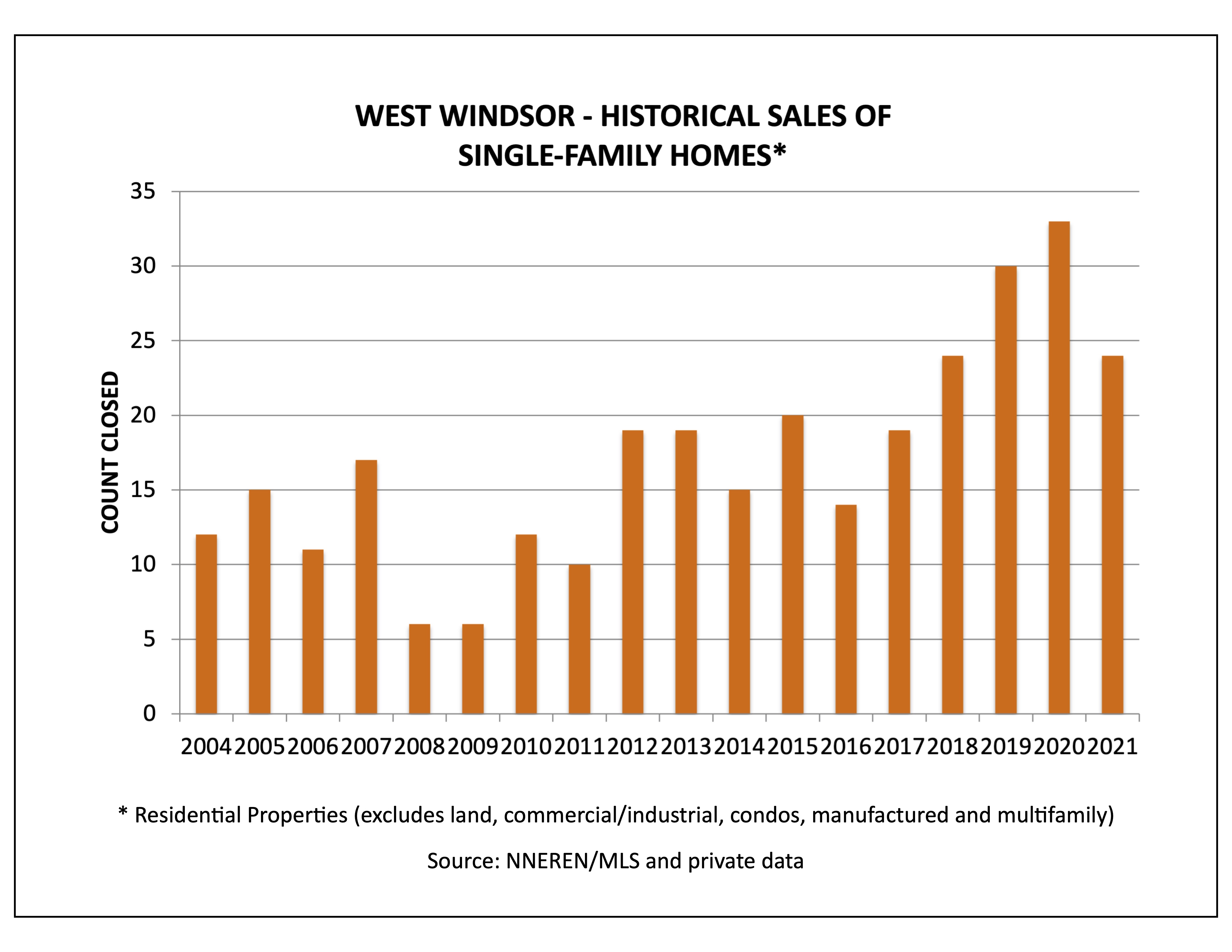 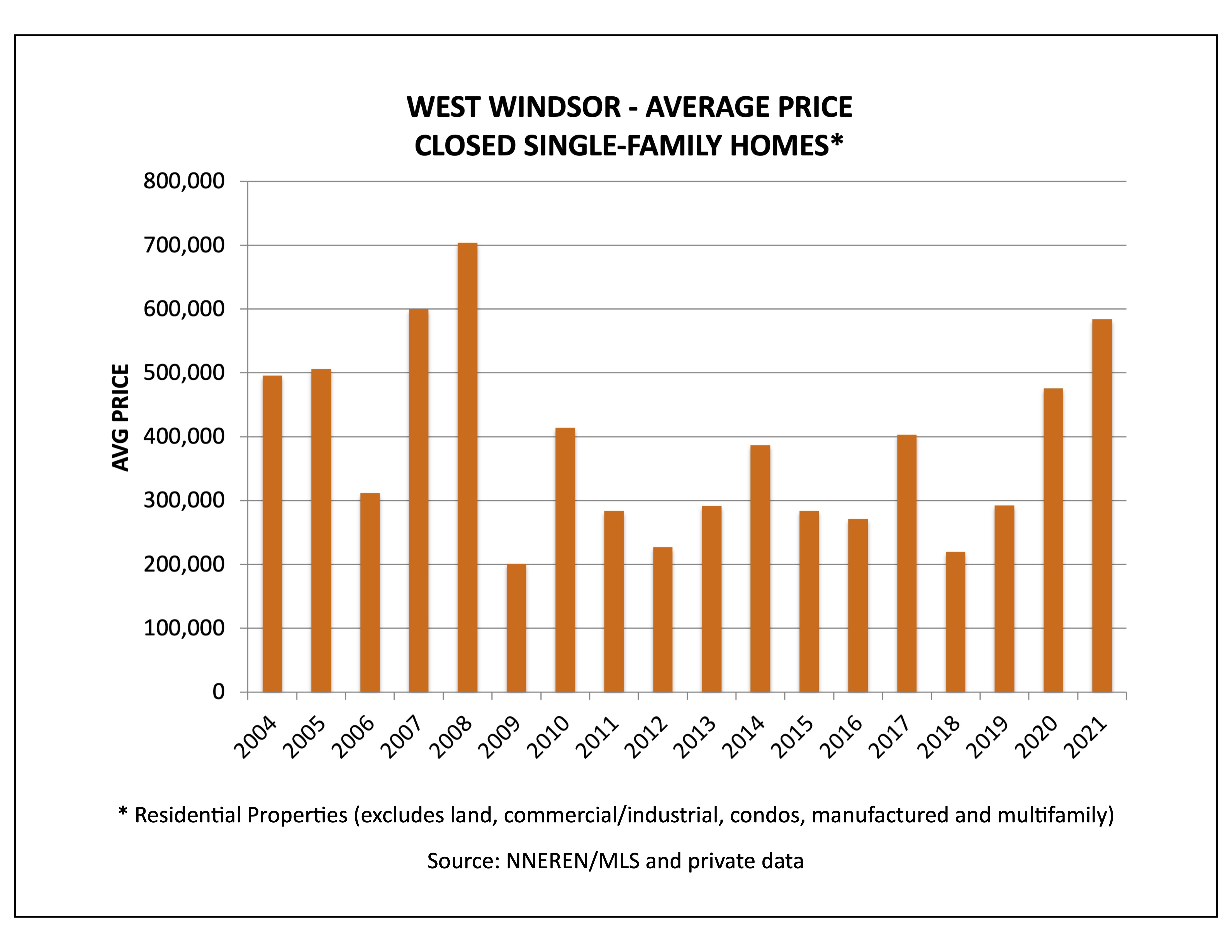 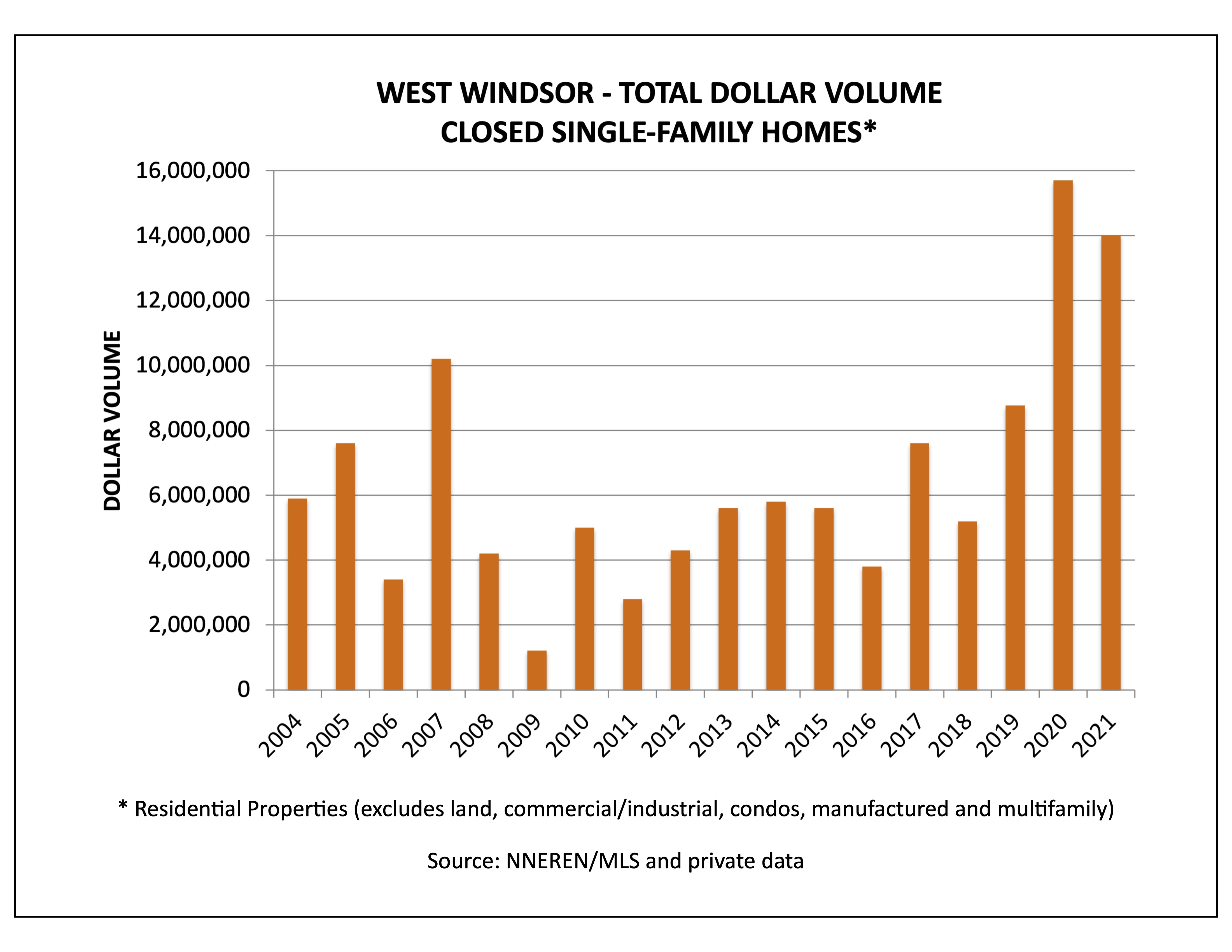 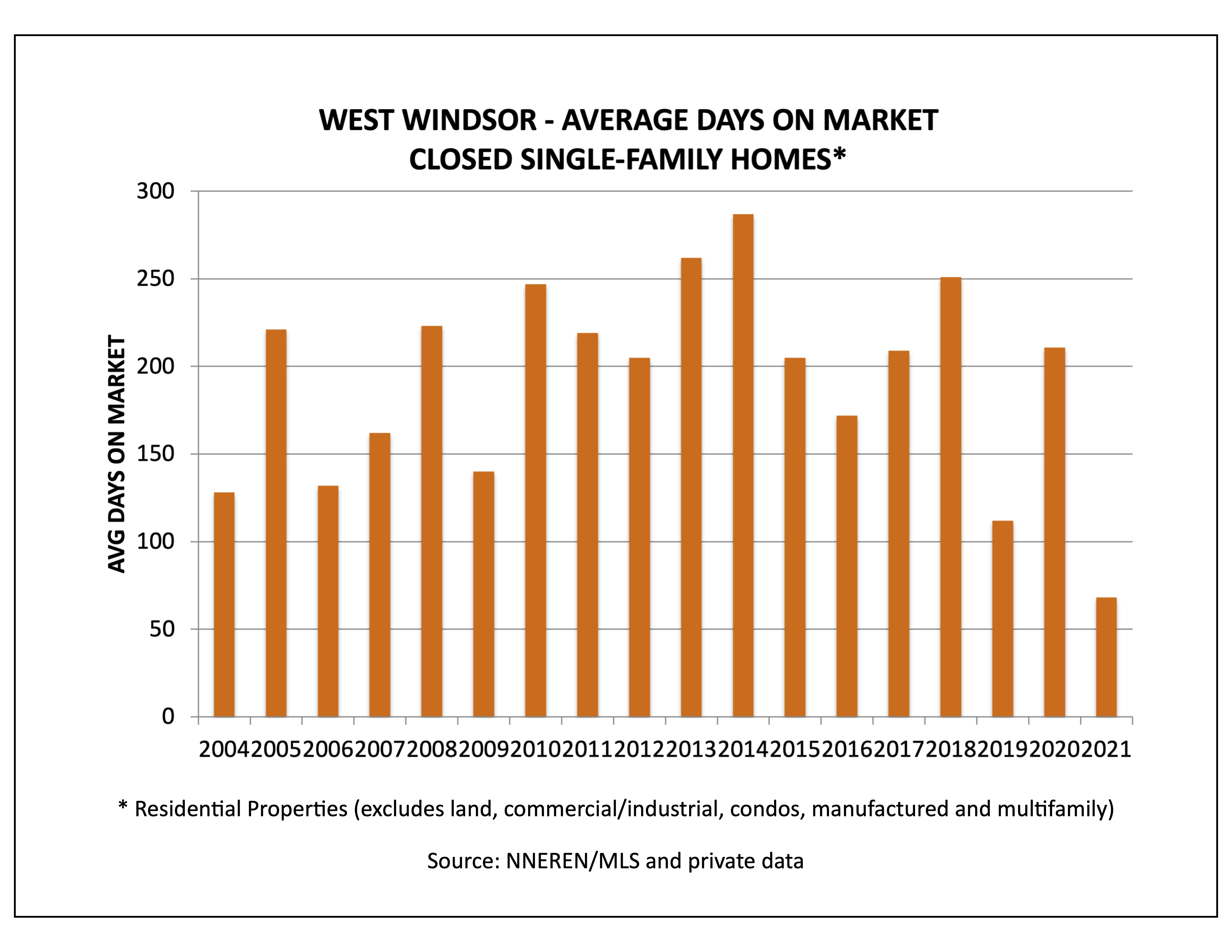 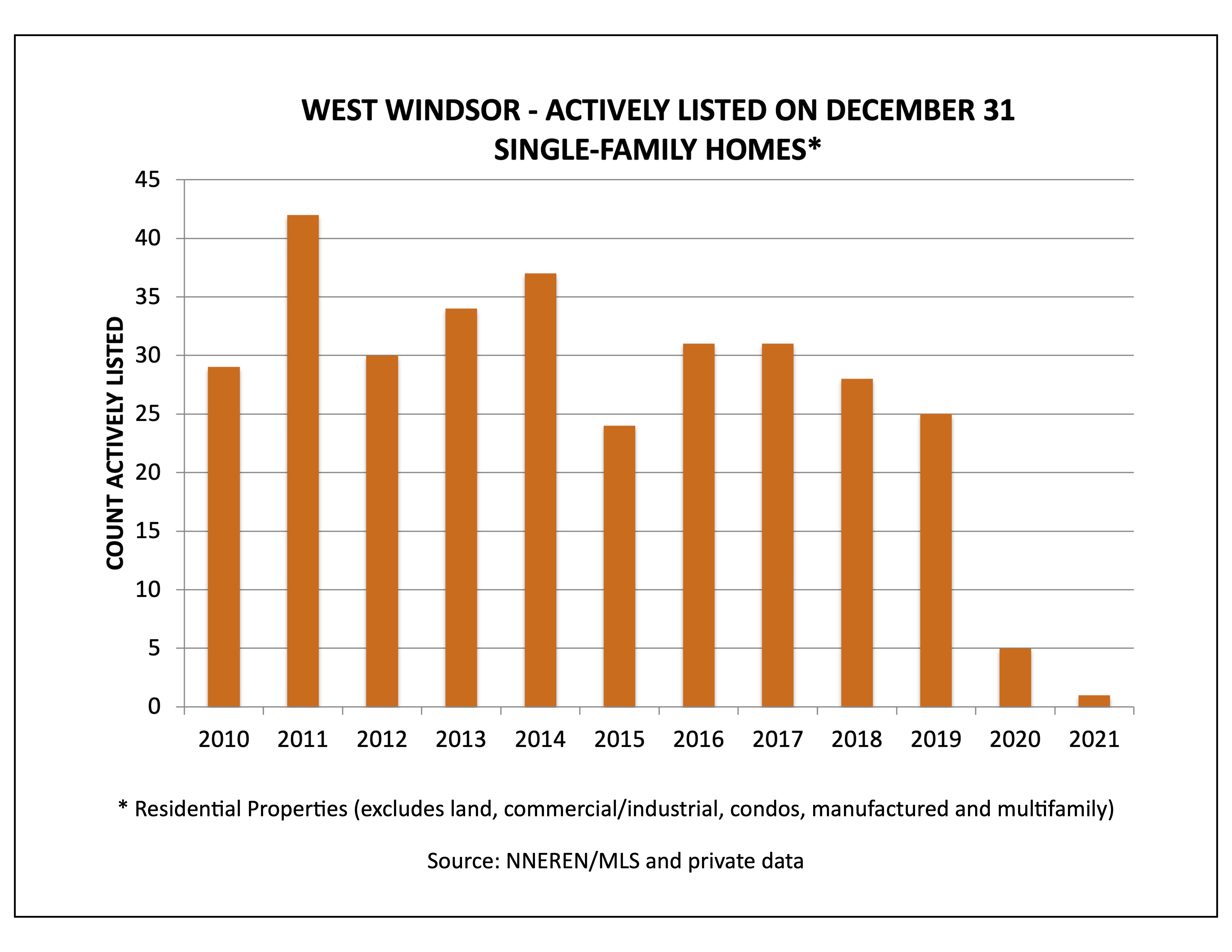 A list of all 24 properties that sold/closed in West Windsor in FY 2021 is below.