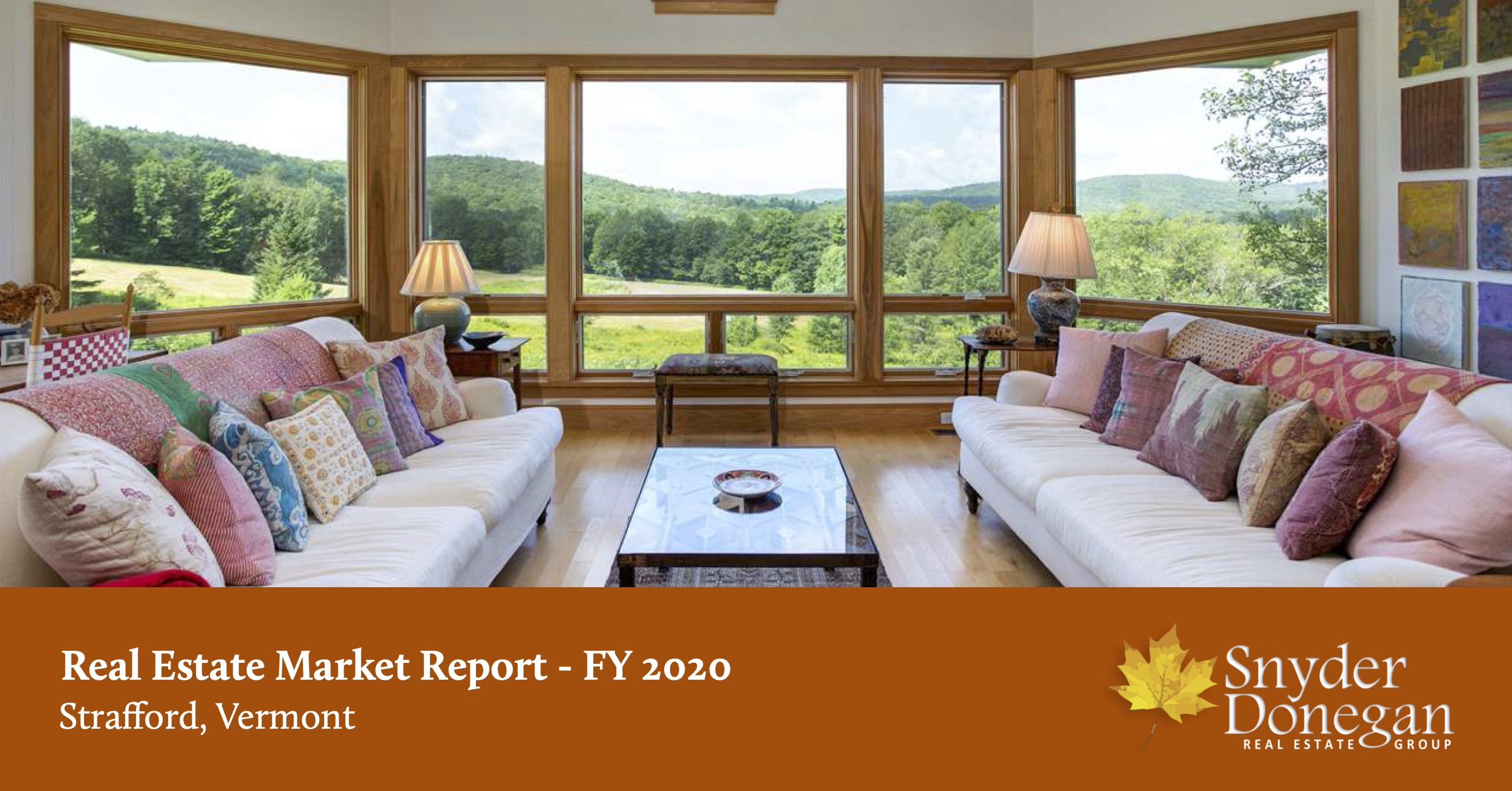 The Strafford, Vermont real estate market saw fifteen (15) sales of single-family homes over the course of 2020, down slightly from eighteen (18) sales in 2019. At the time of this writing there were an additional four (4) homes active under contract or pending and likely to close in the coming months.

Though statistically not the market’s most successful year on record in regard to sales– 2017 saw twenty-two (22) closed transactions– homes that did sell were on the market for just 126 days, down from 162 in 2019 to its shortest duration since 2010. Additionally, of the total homes sold, six (6) did so either at or above the seller’s asking price.

While buying activity may have appeared slower in Strafford in relation to neighboring towns in the Greater-Hanover Lebanon market area, we believe this was likely due to the lack of inventory available. As of December 31, there was just one (1) single-family home actively listed in Strafford, down from six (6) from the same date in 2019 and down a staggering 92% from 2018. Considering this, Strafford will need a considerable infusion of new listings to keep up with what we expect to be continued strong buyer demand in 2021.

The Greater Hanover-Lebanon market area (Hanover, Hartford, Lebanon, Lyme, Norwich, Plainfield, Strafford) also had a banner year in 2020 with 439 sales of single-family homes, eclipsing its 2019 total of 338, a 30% increase. Like the Greater Woodstock area, each town in the GHLA either met or exceeded its 2019 figures for total sales, with Hanover, Hartford, and Lyme setting all-time records. In 200 of the 439 sales that transacted over the year, buyers paid either at or above a seller’s asking price, with the average price of a home reaching $505,604. Not surprisingly, these record totals have left a vacuum in terms of available inventory, as there were just twenty-eight (28) single family homes actively listed in the entire Greater-Hanover market area on December 31 compared to eighty-four (84) at the same point in 2019.

In regard to luxury sales, the Greater Hanover-Lebanon market area saw thirty-six (36) sales of homes that sold/closed for $1 million or more. Snyder Donegan was pleased to represent the buyers, sellers, or both in the highest priced 2020 individual home sales in both Hanover (24 Occom Ridge – $3.1 million) and Lyme (42 Claflin Lane – $2.575 million).

Inventory is now genuinely tight at most price points up to about $1.5 million, and prices clearly rose, particularly in moderate price points and in properties closer to well-known towns like Woodstock and Hanover. Because of this, we are starting to see buyers move both outwards in location from traditional “centers” and upwards in price. And more rural, even “remote” properties have special appeal to those seeking more permanent safety from the COVID storm or a simpler way of life.

STRAFFORD FY 2020 BY THE NUMBERS

Charts illustrating portions of the above information can be found below, followed by a complete list of all 15 properties that sold during the full year of 2020. 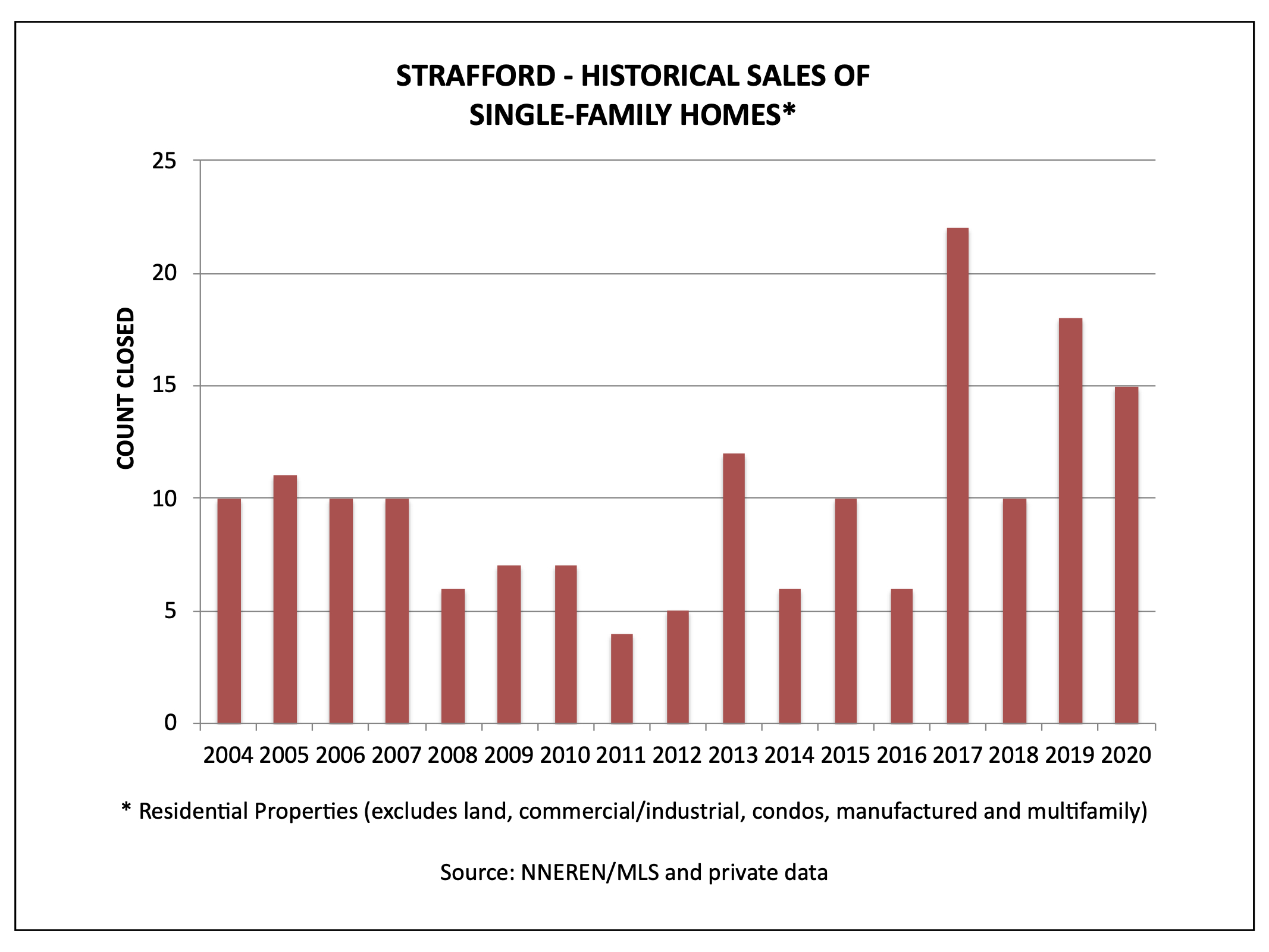 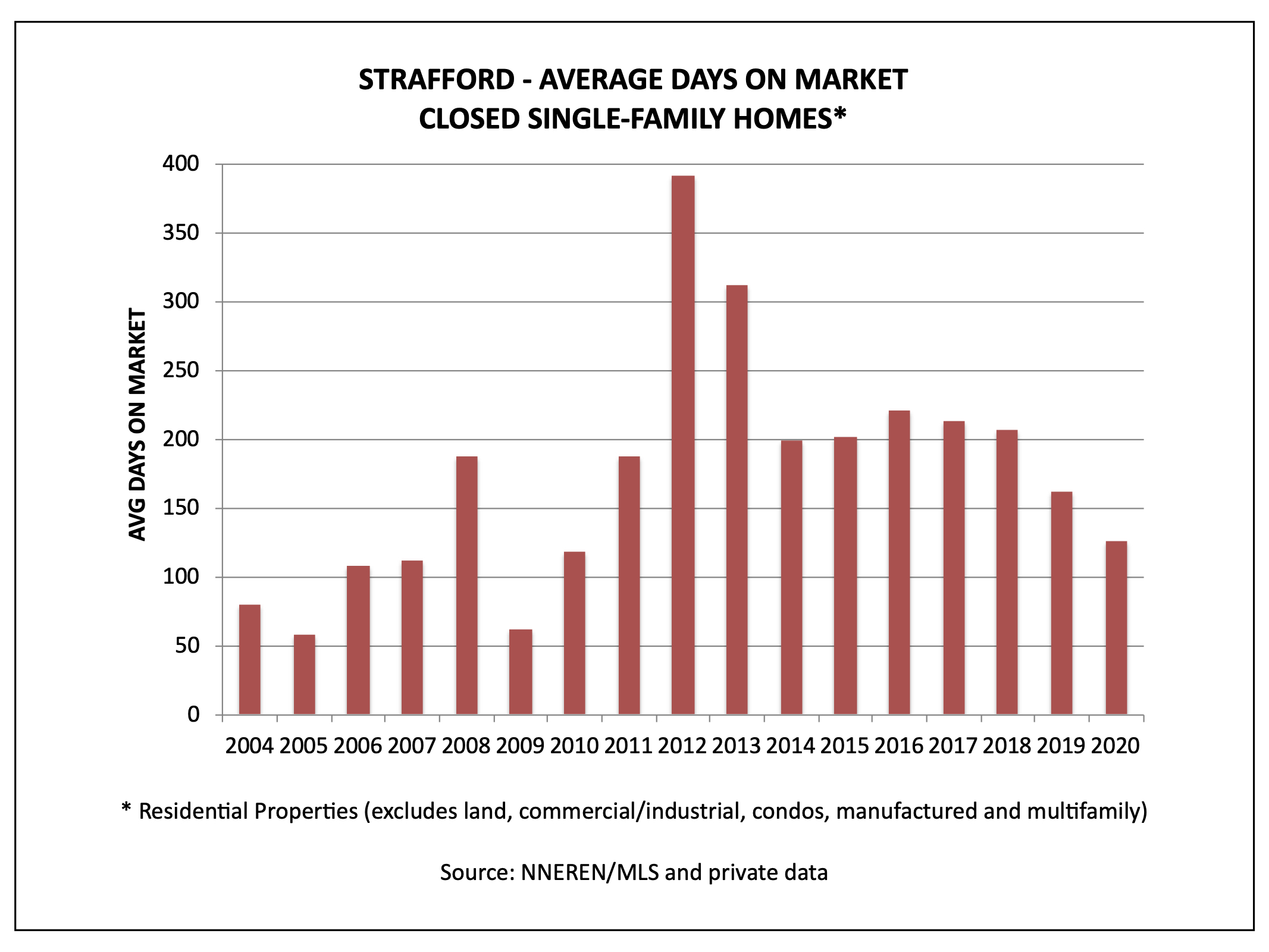 A list of all 15 properties that sold/closed in Strafford during FY 2020 is below.