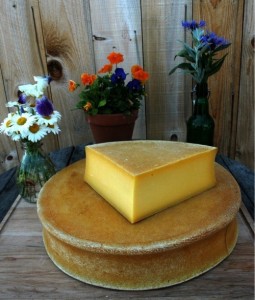 As one key element of breakfast this morning Jackson House Innkeeper Rick Terwelp presented his guests with Thistle Hill Tarantaise cheese from North Pomfret -- just a few miles away -- drizzled with local honey. Cups, plates and bowls made across the street at Farmhouse Pottery provided sturdy simple elegance to the dining tables which sit either next to a blazing fireplace or a serene picture window looking out on a November landscape, grounds still green up to the hillside. 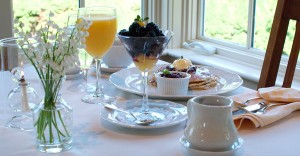 It's all the little details with a commitment to local, local, local that make a difference to Jackson House Inn guests, according to Kathy Terwelp, Rick's wife and co-innkeeper who we found with a welcoming smile and bundle of tablecloths in her arms on a recent morning. 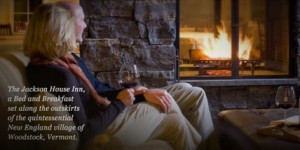 Rick and Kathy have owned and run the Jackson House Inn for four years now, having bought and made many improvements since 2010. But Kathy says they never were the couple that sat around dreaming about running a bed and breakfast but when they had the opportunity after many, many years visiting Woodstock, they bought the property, believing it felt the most "Vermonty." They have kept the place fresh, with a twinkle and sparkle that seems evident everywhere. Now, they marvel at having served guests from almost all 50 States, South Africa, South America and beyond. Originally from New Jersey (Rick working the commuter run into Manhattan), the Terwelps got to know Woodstock while taking their two kids to and from nearby Camp Billings. 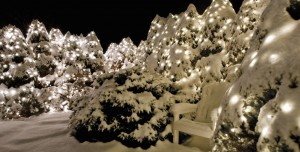 Rick's passion is cooking (yes, we'd say a total foodie!) who puts so much care into creating locally-sourced, elegant breakfasts that Kathy says it is now one of the signature experiences of the Jackson House Inn stay. People skills are paramount, of course, in the hospitality business -- especially at a bed and breakfast where guests and innkeepers interact on an intimate level. And Kathy certainly has these skills in spades, having worked first as an elementary school teacher and then as a curriculum coordinator. She notes that in education you are dealing with people's most precious thing: their kids so that certainly seems useful for helping people enjoy their visits to the Jackson House Inn and to Woodstock. Review after online review of the Jackson House Inn notes the Terwelps care and graciousness in making people's stays exceptional. It doesn't hurt that they have invested in the property and structure in major ways, first re-furbishing the grand front porch, recently re-doing the bathrooms and improving the guest rooms. All have a well-polished touch of design -- somehow crisply up-to-date in a well-burnished atmosphere. 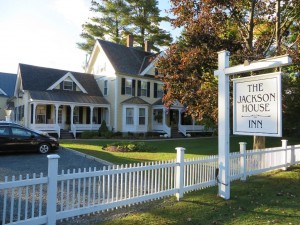 The Jackson House Inn certainly evokes Vermont and its history of wayside New England inns but without any degree of old-world stuffiness. You can almost breathe the fresh air through the dining room windows as private park-like spaces beckon, "Come outside, let nature soothe and rejunvenate you." 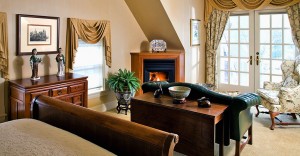 And when you come in from outside, from wandering Woodstock Village or skiing nearby Suicide Six, Killington or Okemo, the Jackson House Inn rooms make you want to snuggle up, just let go, rest knowing, of course, that Innkeeper Rick, with that little twinkle in his eye, will be creating something scrumptious for you when you get up in the morning. http://jacksonhouse.com/