I drive by this structure every day on the way to my real estate office in Woodstock and couldn't resist digging up a video I created when Tropical Storm Irene came through. The flood was incredible so check out the photo and the water level in the video. 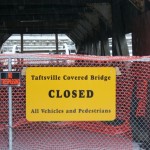 It is sad to see what has become of the Taftsville Bridge and it will be 2014 before we see it again in all it's glory. The photos below were taken just after the first of the year (January 13th 2012).  A mad dash has taken place to remove, store, and preserve half the bridge so the footings don't take it all down river in the Spring time thaw. 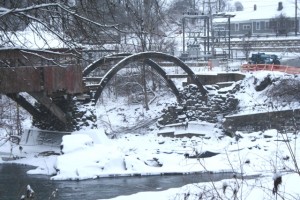 Missing Half the Taftsville Bridge

It is surprising to see how lack of access to a local bridge affects behavior. Road running has significantly declined along River Road, Quechee is far removed and poorly accessible, business at the Taftsville Country Store is negatively affected, and a general sadness occurs when most drive by this historic landmark.

For the next couple years we will continue to see a barren but stubborn bridge standing to the testament of rugged construction and equally rugged individualism. We look forward to better days for all in 2012 and the bridge in 2014.